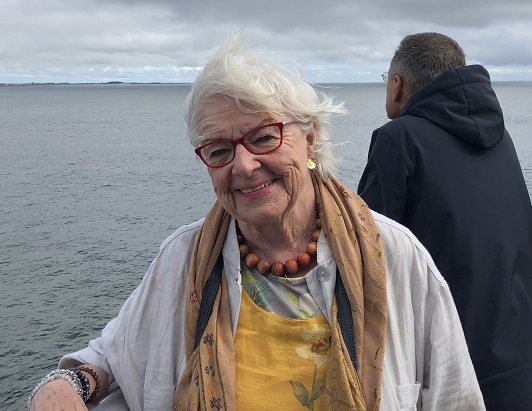 Marion Therese Kunstenaar was born March 1937 in The Hague, The Netherlands. Together with her parents Michel and Tiny Kunstenaar-van Ommen they survived the war as the only members from the Kunstenaar family.

Marion grew up in Scheveningen – The Hague, where she attended the local Gymnasium Haganum. She was raised with a deep love of music and art, attending concerts from an early age, playing the piano and filling her schoolbooks with drawings everywhere.

After obtaining her diploma in 1956, she married Max Wolff still that same year and moved to Arnhem in the east part of The Netherlands. There her three daughters, Josee, Yael and Batya were born.

In 1981 she divorced and moved to Amsterdam. She studied Judaica, worked for the Jewish Community, wrote for the Dutch Jewish Weekly and was active in Interfaith organisations. In 1989 she met her second partner, Elie Saghroun in Paris. In 1995 they moved to Israel and settled down in Jerusalem.

After Elie passed away in 1999, Marion founded an organisation in his memory to feed mal-nourished Jewish and Arab children in and around Jerusalem, called YAD ELIE (www.yadelie.org), profit of sold paintings goes to this organisation.

Since meeting the renowned painter Derek Stein, she became his student and friend and never stopped painting since.

Music remains her great love, but the love of her life are her three grandchildren : Yoash, Zoe and Jona.